With an estimated market worth up to $50 billion in 2030, the market for carbon credits is entering a new era. [1].

The number of companies committing to climate neutrality is constantly increasing. Well-known examples include tech giants Google, Amazon, or Microsoft. This, however, raises the question of how large organizations can reach carbon neutrality and grow at the same time? As opportunities to reduce emissions through circularity or efficiency improvements are still limited, carbon offsetting has become a popular method to compensate for emitted greenhouse gases. While supporters consider carbon offsetting as an important tool to reach net zero, critics argue that it can have counterintuitive effects on global warming. This article provides insights about offset providers and their offset projects enabling companies to choose a meaningful compensation strategy.

Carbon offsetting entails a reduction of greenhouse gases by compensating for emissions made elsewhere or by directly sequestering greenhouse gases from the atmosphere. As such, carbon offsets can represent an effective tool to address the climate crisis but only if the emission of greenhouse gases cannot be avoided in the first place. After accounting for their emissions, businesses should try to avoid and reduce them in a first step. When the availability of offset projects leads to a diminished willingness to avoid and reduce emissions, carbon offsets do in fact incentivize polluting behavior. In such a scenario, carbon offsetting exacerbates climate change instead of mitigating it.

The following landscape provides an overview of current offset providers in the DACH region for businesses as well as private customers. Besides big players like south pole, startups like Offsetra or Klimate.co are included. The depicted providers differ not only in company size but also in their approach to offset emissions: While most providers offer forestry conservation projects, for example, carbon sinks and waste-to-energy projects are rather rare. 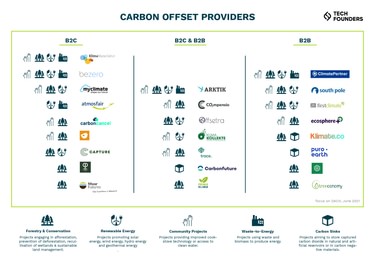 From an environmental perspective, offset emissions cannot be set equal to avoided ones.

Due to given risks and limitations of current offsetting practices, compensating emissions is still not as effective in tackling the climate crisis as avoiding them. Here is why:

Be guided by the principle: Calculate – reduce – offset.

To holistically fight climate change as a business, it is crucial to understand different strategies and limitations to reach net zero. While offsetting represents the number one go-to-strategy for many companies, it is advisable to check possibilities to avoid and reduce emissions first. Many carbon accounting and management providers offer support for businesses to calculate and reduce their emissions. Only when carbon reductions are fully exhausted should carbon offsets be considered.

To choose meaningful offset projects and to avoid possible pitfalls, check our QuickStart Guide below: 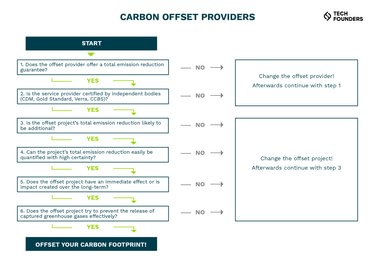 In conclusion, carbon offsetting should not undermine our efforts to actively avoid and reduce emissions in any case. Nevertheless, when polluting is inevitable, we should aim to compensate for emissions by funding meaningful and effective climate projects only. This can be achieved by considering the following key take-aways: